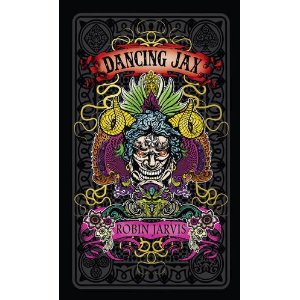 At the end of a track, on the outskirts of an ordinary coastal town, lies a dilapidated house. Once, a group of amateur ghost hunters spent the night there. Two of them don’t like to speak about the experience. The third can’t speak about it. He went into the basement, you see, and afterwards he screamed so hard and so long he tore his vocal cords.

Now, a group of teenagers have decided to hang out in the old haunted house. Dismissing the fears of the others, their leader Jezza goes down into the basement… and comes back up with a children’s book, full of strange and colourful tales of a playing-card world, a fairytale world, full of Jacks, Queens and Kings, unicorns and wolves.

But the book is no fairytale. Written by Austerly Fellows, a mysterious turn-of-the-century occultist, it just might be the gateway to something terrifying…and awfully final. As the children and teenagers of the town are swept up by its terrible power, swept into its seductive world, something has begun that could usher in hell on earth. Soon, the only people standing in its way are a young boy with a sci-fi obsession, and his dad – an unassuming maths teacher called Martin…

For some reason, I found the opening section of this book quite hard to get into, and I wasn’t looking forward to continuing. Then there suddenly came a point where everything suddenly seemed clear, and I had trouble putting it down!

It opens with a group of adults going into an abandoned house, where the leader appears to become possessed by something. Whilst in the house, they discover and take crates of a book – when others in his group start to read it, they also start to change.

As the story continues, it becomes apparent how important this book is – almost everyone who reads it becomes changed.. mainly children and teens, but then also adults. I won’t spoil any more of the story by explaining why or how.

I do have small criticisms – the first is the fact that the opening section appears to be more confusing than the rest of the book, which may lose it some readers, but then it’s quite possible that was just me. I would say though, that if you do struggle with the opening, it’s worth carrying on.

The other criticism I have is of the small ‘rants’ the author makes, through some of the characters speeches. They are good observations of our society, but they could have been put across in a more subtle way – it really did feel like a sledgehammer approach, and to me affected the flow.

However, these two things aside, my overall impression of this book is really rather good. It’s a clever idea that reading can affect people in such a negative way, there’s a building sense of anxiety, and some rather disturbing scenes. For me, this falls into the genre of YA horror, mainly because of the scenes mentioned. It’s not particularly gory or scary in the traditional horror way, but it is rather disturbing. I wouldn’t recommend it for young children, or those too sensitive. But for someone looking for an absorbing, disturbing read, it comes recommended.. for young or old.