The Reviver by Seth Patrick 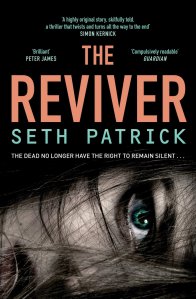 Jonah is a Reviver – someone who can revive the dead for a short period of time. In Jonah’s case, he works for a forensic team, so he revives in order to let the victim testify about the events of their death. It’s a well controlled experience, and is used as evidence in courts.

However, during one revival, Jonah experiences something which makes him question exactly what they’re doing.. another presence, which he can’t explain. He’s told it’s just an hallucination, brought about by stress, but Jonah isn’t convinced, and starts to dig deeper. He ends up involved in something much bigger than he expected.

For the majority of the book, this feels like a crime / thriller, with this very interesting twist. The whole issue of Revival is explored, including it’s uses and problems, and it’s this aspect which lifts it well above average. Some reviewers have found the book too slow, but I disagree – there’s a lot of information to give, and aspects of reviving to explore, and I enjoyed this.

Throughout there’s an uneasiness, a suggestion of a supernatural element, and towards the end this becomes more apparent, and there’s a definite switch in the book. I have to admit, this did worry me for a while, because I’ve seen similar books which started to feel.. well, silly. In my opinion though, Seth keeps a realistic tone, and it soon settles into a good ending.

Whilst it would have been possible to keep simply to the idea of forensic revival, I’m not sure how far it could have been taken in the future. I would imagine that the supernatural aspect will feature quite strongly in the next book, and I look forward to finding out where we’re taken next.

One thought on “The Reviver by Seth Patrick”