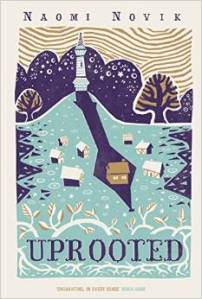 “Our Dragon doesn’t eat the girls he takes, no matter what stories they tell outside our valley. We hear them sometimes, from travelers passing through. They talk as though we were doing human sacrifice, and he were a real dragon. Of course that’s not true: he may be a wizard and immortal, but he’s still a man, and our fathers would band together and kill him if he wanted to eat one of us every ten years. He protects us against the Wood, and we’re grateful, but not that grateful.”

Agnieszka lives a simple life in her village, along with her best friend Kasia, but they are constantly under the threat of the corrupted wood on their borders – sometimes the power of the wood will reach out, and cause harm and damage. The people in the village rely on a wizard, known as the Dragon, to protect them, and offer his magic against the wood’s effects.

In return for his help, he takes a young woman from their village every 10 years. They are returned, but will not speak of their time, and they leave the village as soon as they are able. Everyone expects Kasia to be chosen when the next 10 years comes around, but instead the Dragon takes Agnieszka.

I was sent a review copy of this book, but I had no idea what it was about, nor had I heard of the author before. As I often do with books I’m unsure of, I started to read the first few pages. I was immediately caught by the writing style, and the character of Agnieszka, and yes, the spell was cast!

Uprooted is a fantasy book, with Agnieszka discovering that she in fact has powers of her own, and also learning more about the mysterious Dragon. There are spells, magical creatures, and adventure. However, there was something a little different about this one, which really did captivate me. It reads like a beautifully told fairytale, which also has it’s dark side. Agnieszka’s growth is as touching as her loyalty, and the aspects of her relationship with the Dragon are also well done. I loved the way the magic was handled, from Agnieszka’s personal path, to the powerful war magic.

There are only certain fantasy books which catch my interest, and this is most certainly one of them. It’s hard to describe any further without wandering into spoiler territory, but if you like fantasy, fairytales, magic and adventure, told with a beautiful style, then you need to try this!

One thought on “Early Review: Uprooted by Naomi Novik”