The Territory by Sarah Govett 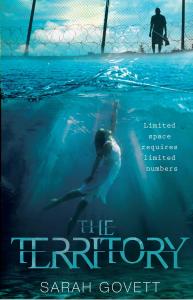 At this time of the year, there are many young people revising for, and taking exams, and we all know there’s a lot of pressure on them. However, imagine if a failure could mean being sent to your death…

Noa lives in a near-future where climate change and flooding have drastically reduced the amount of liveable land, now known as The Territory. To be allowed to stay, children at 15 must achieve a high pass on their exams. The rest are sent to the Wetlands, where conditions mean a life of misery, and often death.

If that isn’t difficult enough, the richest children have been equipped with a ‘node’, which allows them to download the information needed for their exams – exams which are based more on fact recall than application…

Sarah has managed to achieve a lot with this book. On one level it’s a compelling dystopian story, and her world building is so well done that this future world feels very real, and scarily close! The flooding which led to the Territory formation is explained, as is the technology available for the rich.

Running through the story however, are also thought-provoking issues, which will make you think a little more about our education system, rich and poor, politics, the climate etc.

Then added to this, is a very real day to day story of a teenager, as she deals with issues of friendship and relationships, school and study.

Despite all this going on, it’s a fast paced story, which kept me turning those pages to find out what would happen next. It has a satisfying conclusion, but is all set up for the rest of the trilogy, which I’m waiting impatiently for.

Firefly Press kindly sent me a copy of this book in exchange for an honest review, and is my first experience of this new publisher. I will certainly checking out more of their books, and have already bought Lost On Mars.