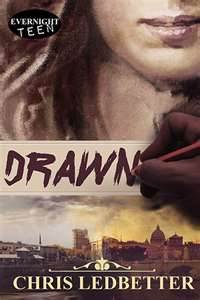 Synopsis (from Amazon):
Caught between the sweltering fall landscape of Wilmington, NC beaches and southern illusions and expectations, all sixteen year-old Cameron Shade thinks about is art. That, and for Farrah Spangled to view him as more than just a friend. Cameron hopes he can win her heart through art. After several warm interactions with Farrah, including painting together at the beach, Cameron discovers just how complex Farrah’s life is. Following a tense run-in with Farrah’s father, she forbids Cameron to speak to her again, but Cameron’s convinced there’s more behind the request. To impress Farrah, Cameron sketches her portrait into a mysterious sketchbook. He nearly jumps from his skin when the sketch moves and communicates with him. Farrah is now in grave danger because the sketch he drew of her sucked her real-life’s soul into the sketchbook. Cameron now has twenty days to extract Farrah. To save her, he must draw himself into the book. If he fails… they both die.

Review:
I don’t read an awful lot of teen fiction, but when I do, I only enjoy it if the premise is original and daring and grabs me from the get-go.

Chris Ledbetter has done something few have done, and that is to write a teenaged boy with whom I, as a woman (and once, a teenaged girl) can relate. I felt for Cameron, I felt for him deeply, and was able to sink into his emotions and passion for art quite effortlessly. Farrah wasn’t quite so well, ahem, drawn as Cameron, but as she was not the main character, only the focus for Cameron’s growing affections, this was understandable – she was attractive, but as a reader I knew little about her, which was pitched very well, as Cameron didn’t really know all that much about her beyond the basics and his attraction for her.

The premise for the story was cleverly thought out and written with a light touch that lifted it above the ordinary – a heavier hand would have thrown everything out of balance and crushed the plot entirely. Its an unusual take on a Pygmalian-type of fantasy, where an artist brings his work of art to life, and falls in love with her, only Cameron is already falling for Farrah before he creates her Echo.

There was a tinge of sadness about the tale too – Ledbetter doesn’t shy away from the darker and more upsetting trials of teen and family life, and the complications inherent in relationships, whether familial, platonic, or romantic – and that’s refreshing. Yet, it never becomes maudlin – that lightness of touch and tone keeps things buoyant and ensures the reader doesn’t sink into depression while turning the pages. It’s a fine line, but Ledbetter walks it well.

Even if you don’t read young adult/teen fiction, don’t discount this book – it’s worth the effort and may just change your mind!

See my interview with the author HERE