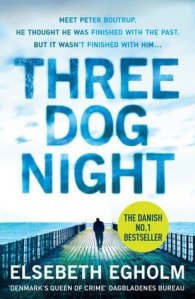 Ex-convict Peter Boutrup has moved to remote, rural eastern Denmark to start a new life and leave his past behind. But when a young woman goes missing on New Year’s Eve and he then discovers the body of Ramses, an old acquaintance from prison, things start to unravel. Two days after the disappearance they find the body of a young girl in the harbour – she is naked, attached to an anchor and her face has been torn off. Is this the body of the missing woman and is it connected with Ramses’ murder? Peter Boutrup must accept that the answer lies hidden in the past that he is trying to forget. (Taken from Goodreads)

In the ever growing world of Scandinavian crime fiction another author has been given the chance at having their work translated into English for the first time. This isn’t the first book written by Elsebeth Egholm, in fact it is her 10th if my maths is correct and it shows her craft as a writer. It would be easy to fall back on comparisons to other Scandinavian crime writers that I like such as Asa Larsson, Jo Nesbo or Henning Mankell but Egholm has a distinct style all of her own and it stands out.

This book has a cornucopia of characters all with a story of his or her own from the underbelly of Danish society. These characters mesh really well with the harsh Baltic winter in the book. This creates an atmosphere which on the surface is pure as the winter snow but when you scratch the surface there is a more sinister edge to things. Interestingly, I found the main character of Peter Boutrup a little weak at first but as the story goes on there is more flesh added to him and I started to really like him.

Peter has recently been released from prison and wants to make a clean start on life and leave his past behind him. His neighbour Felix has given up on life and is literally a shell of what she was previously. Mark Bille Hanson is a policeman who has returned to his local town with the intention for him to recuperate from an illness. Finally, Kirsten Rojel is a diver who is caught in between her passion for diving and the expectations of her father as to what is a suitable job for a woman. All these characters have secrets and their lives collide during the story. Kirsten was a character I particularly liked and is the one character which really stood out for me. I think this was a combination of her being a strong female while at the same time being distinctly human. None of the character stories require a large leap of faith something which I can find a little annoying at times.

The book really flows well and I found myself reading 50-60 pages at a time, something which I rarely do. I had thought that at 462 pages it would take me a while to get through but it was a real ‘page turner’. I ended up reading it in just over a day due to the way that it really sucked me in. At several times I thought I knew who the killer was only to be thrown off the scent again. The plot is fairly involved but not to the point where I struggled to suss out who was doing what.

I think fans of thrillers and crime novels will love this book and I really hope the next one gets published in English before too long.