Posts Tagged With: The Lord of the Rings

The Wisdom of the Shire by Noble Smith 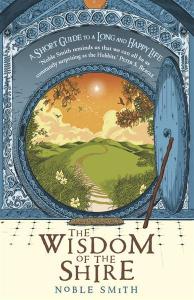 Synopsis (from Amazon):
Coinciding with the release of the first of Peter Jackson’s Hobbit trilogy, his follow-up to the huge Lord of the Rings success, The Wisdom of the Shire is a practical and fun guide – for Tolkien fans everywhere – showing us how to apply the wisdom of The Hobbit to our everyday lives.

Hobbits are those small but brave little people, whose courage, integrity and loyalty allow them to triumph against odds that might appear overwhelming to the rest of us. Noble Smith has long believed there is much we can learn from Frodo’s determination, Bilbo’s sense of homeliness, Sam’s fierce allegiance, and Merry and Pippin’s love of food and fun. Like The Tao of Pooh, The Wisdom of the Shire is the first book to show Tolkien fans just how much there is to learn from those small but brave little people – the Hobbits.

Packed with amusing insights and fascinating trivia, this fun and insightful guide is all you need to complete your quest in life, and cast your cares into the fires of Mordor.

Review:
This is one of those delightful little books that “does exactly what it says on the tin.”  It explores the Shire and visits with the Hobbits who live there like old friends, as well as stopping by various other places in Middle Earth and introducing us to elves, wizards, dwarves, and even ents, as we get to know them better and discover exactly what it is that makes Hobbits so, well, Hobbit-ish.

Hobbits, of course, are some of the best-loved characters in literature, and there is barely a person you’ll meet who hasn’t at least heard of them, even if they haven’t read the books by Tolkien or seen Peter Jackson’s wonderful films. The Wisdom of the Shire looks at how following the Hobbits’ example can lead to a happier life as we learn to appreciate the small and simple things in life – good food, good friends, a cosy home, and a love of the natural world around us.

Filled with fascinating tidbits of information about the people and places of middle earth, as well as the author and the actors who have played roles in the films, this little book keeps you turning the pages to the very end, where you will find a Hobbit test (apparently I am extremely Hobbit-like!) and directions for making your own small Hobbit-inspired garden.

If you’re a fan of the books or the films, you will love this book. Even if you’re not, you’ll probably be able to get something out of the gentle advice it gives in an entirely Hobbit-ish way – never intrusive, always warm and friendly – and will be left with a warm feeling inside, and possibly inspired to live your life the way the Hobbits do, even if you live in the middle of a busy city.

Categories: Reviews | Tags: book, book review, book reviews, books, fantasy, J.R.R. Tolkien, Middle Earth, review, The Hobbit, The Lord of the Rings, The Wisdom of the Shire: A Short Guide to a Long and Happy Life by Noble Smith | Leave a comment

The Lord of the Rings by J.R.R. Tolkien

Date of Publication: Published in three volumes, 1954-1955Number of Pages: 1178 (in one-volume edition, including appendices and index)

Synopsis: Four hobbit friends leave their beloved Shire on a quest to destroy the Ring of Power, bequeathed to Frodo Baggins by the famous Bilbo. They are helped along the way by the wizard Gandalf, a mysterious stranger named Strider, an Elf called Legolas, a Dwarf named Gimli, and Boromir, a powerful warrior from Gondor. They are met by tragedy and loss, unexpected friends and good fortune, and always adventure throughout their long journey. Finally, they are separated, and three groups must go their own way. Strider, Legolas, and Gimli come to the aid of the Rohirrim in their struggles against the wizard-turned-evil, Saruman. The young hobbits, Merry and Pippin encounter a mysterious race of beings deep inside Fangorn Forest, and unwittingly play an important role in the war against the dark forces. Frodo and his extremely loyal servant, Sam, go on their own to the land of Mordor, to destroy the Ring, which is slowly strengthening its hold on Frodo, in the fires of Mount Doom. They are followed, and sometimes helped, by the creature Gollum, who is obsessed with the Ring, which he once possessed. Each member of the Fellowship goes into the unknown, but finds in himself the courage to face it. None of them emerge from their adventure without being changed forever.

Review: I have to start out by saying that this is my favorite book of all time. I’ve read it multiple times, I’ve studied it, I’ve written a paper about it, and I’ve read books about it. For some, this can be one of those life-changing books. The first time I read it, I was astounded, not simply at the story, but the incredible beauty of it. Tolkien started his long writing career by trying to create a mythology for his beloved adopted country of England. He created two languages, Sindarin and Quenya, and made up stories about the people who spoke them. The Lord of the Rings is the result of over 15 years of work and a demand for a sequel to his classic, The Hobbit. When you read the story, you can not only see the landscape and recognize it, but you believe that it’s real. You feel like you’ve discovered some long-forgotten manuscript, written by a vanished race, something that must have existed.

Many people ask me how they should go about reading The Lord of the Rings. My answer is simple. If you’ve read The Hobbit, great, if not, read that first. Then you can move on to the more difficult The Lord of the Rings. If, after that, you find that you want to know more, then you can read the true work of Tolkien’s heart, The Silmarillion. Some people object to The Lord of the Rings, saying that it’s too long, it’s too dense, there are too many characters and songs, or that it’s too religious. I say that these people are too closed-minded. Remove any expectations from your mind, and take it for what it is: a work of heroic fantasy, inspired by the legends of the ancient Norse and Anglo-Saxons. Accept the songs and poems as relics of a forgotten age. Allow yourself to become absorbed into the story, and it’s an experience you can never forget.