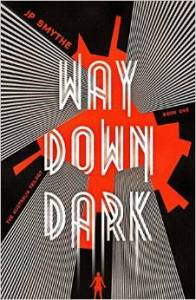 There’s one truth on Australia.

You fight or you die.

Way Down Dark is published in July, but I’d been begging the publishers for an early copy for a long time. I’d read The Machine by the same author, and I was interested to see what James would do with a YA book.

Chan lives on a large spaceship, which was sent away from a dying Earth hundreds of years ago. The ship is now not fairing much better, not only is it physically falling apart, but the society within has become dangerous and violent, with various gangs.

Chan has learnt to take care of herself, she knows her way around most of the ship, and knows which parts to avoid. As a particularity violent gang attempts to take over more of the ship, things start to change.

Just as I thought I had a grasp on the book, something unexpected happens, and everything changes drastically. I’m not going to go into that, and I hope other reviewers stay clear too.. it’s s turning point in the book which I want everyone to discover for themselves!

Personally, I found the final part of the book to be a little rushed, and I struggled with some of the information being given. This is part of a trilogy, and I wonder if this part could have finished at a slightly different, earlier part. It is rather a cliffhanger ending, but that can’t really be avoided.

Despite these slight negatives, the strength of this book is in it’s fast paced storyline, and the darkness of life on the ship. It’s a cliché, but it’s a book which you literally won’t want to put down, and I’m really looking forward to seeing where James is going to take the story in part two.